Archbishop Elisey of the Russian Cathedral in London commissioned from Aidan Hart and Co various items for his cathedral’s major refurbishment, including this brass chandelier for the sanctuary, eight icon cases (kiots), and a silver crosier as a gift for Patriarch Kirill of Moscow and All Russia.

The chandelier is inspired by early Byzantine designs.

The cases were designed by Aidan Hart, and expertly crafted by cabinetmaker Dylan Hartley  with carving by sculptor Tim Royall.

His Eminence asked that the silver crosier represent the ancient Orthodox history of Great Britain. The three spheres therefore have relief work based on Celtic, Anglo Saxon and Romanesque designs, while the head is inspired by a Romanesque work in ivory, dating to around 1000 AD. These were carved by Aidan and his colleague Martin Earle, then cast into solid silver and assembled by Harts Silversmiths of Gloucestershire, England. 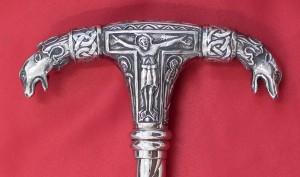 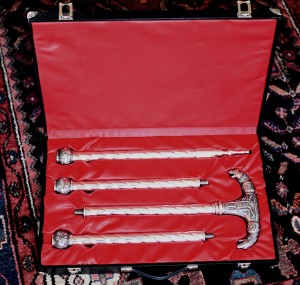 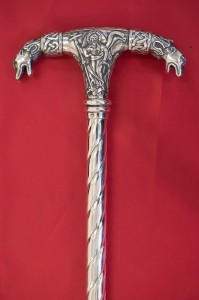